How to clean and repair your gutters

The exterior of your house takes a constant battering from the elements - especially wind and rain. This can take its toll on the masonry and guttering systems, and can sometimes overwhelm them. Read on for expert tips, and a foolproof step-by-step guide on gutter repair - we'll get your system back up and running in no time. 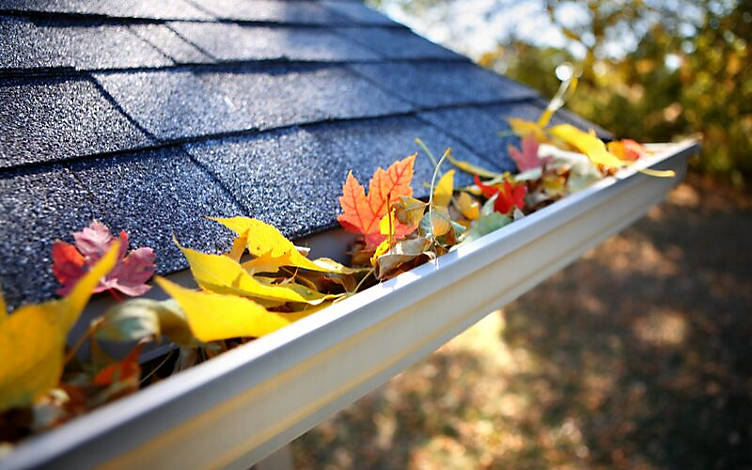 If your guttering isn't working properly, water will overflow and saturate the wall below. Try and fix any problems with your gutters as soon as possible.

Take time to make sure your ladder is secure before you start work. Never rest it against guttering - use a ladder stand-off instead, and ladder stabilisers on uneven ground. A scaffold tower isn't as easy to manoeuvre as a ladder, but it does give you a safe working platform and plenty of room to put your tools. Assemble the components (carefully following the manufacturer's instructions), check your platform boards are secure and construct a guard rail around the platform. On soft or uneven ground, stand the feet of your tower on level scaffold boards.

You can smooth off patches of rust with an emery cloth, but take care not to rub so hard that you make a hole. If there are large areas of rust, brush them off with a wire hand brush or use a round wire cup brush fitted in an electric drill. After that, paint the affected area with a rust-inhibiting metal primer, and then with black bitumen or gloss paint. If there are any small holes in your gutter, fill them first with roof-and-gutter sealant. You can fill a bigger hole with glass-fibre filler, but if the guttering is in poor condition with a lot of holes you should really replace it altogether. 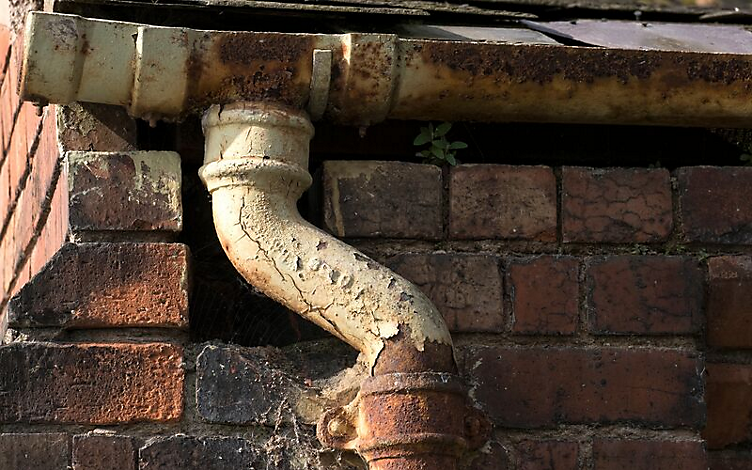 Water overflowing from a hopper head shows that there are leaves or some other debris in the hopper head itself, or maybe a blockage in the downpipe below it. Start by scooping out any leaves in the hopper head. If the downpipe is blocked, try unblocking it from ground level. Cover the drain, turn on the water in a garden hose and push it up the pipe to dislodge the debris. If that doesn't work, use drain rods to unblock it from the top.

For a metal gutter, scrape any dirt out of the joint and dry it. Then inject roof and gutter sealant into the joint with an applicator gun. If you have plastic guttering joined with a union piece, one of the gaskets (seals) may be damaged. Squeeze the gutter to release the union piece, peel the gasket away and replace it with a new one. It may be that a loose or wrongly positioned bracket has caused the guttering to sag, so that the water forms a pool rather than flows away. If the screw had worked loose, you should be able simply to insert a wall plug and re-screw the bracket. If the bracket was wrongly positioned, fill the hole and refix it. And if your guttering still sags after all this, fit extra brackets to support it.

Block the bottom of the downpipe with a rag to stop any debris getting into the drain, then scoop out the leaves and silt from the gutter with a small trowel. Remove the rag, and rinse out the gutter and downpipe with water. To stop the problem recurring, fit a LeafGuard cover over the outlet, and a gutter guard over the guttering (just cut it to size and clip it in place).

Leaking from the end of a length of guttering

Water will run off the end of a length of guttering if the stop-end has come away, or one was never fitted. Check the dimensions and profile of your guttering, and buy one to fit.

If a plastic downpipe is loose, check to see if one of the clips has lost a connecting bolt. Then replace it with a galvanised bolt of the same size. Another reason could be that the wall plugs have worked loose. If this is the case, replace them and refix the screws, or fit new 6.5mm gauge galvanised screws. If a cast iron downpipe is loose, take out the fixing nails or screws and insert wall plugs. Then drive the nails back in or fit galvanised screws. If wooden plugs are loose, just remove and replace them.

How to clear a gutter

Our video guide gives you step by step advice to help you clear your gutters.

How to repair a leak in your guttering with tape

You can use joint repair tape to fix minor leaks or cracks in your cast-iron guttering or downpipes.

How to repair a leak in your guttering with sealant

You can use roof and gutter sealant to repair bigger leaks in metal guttering, or a damaged union piece in plastic guttering. Always protect your hands by wearing heavy-duty gloves, especially when you're applying the sealant.

How to repair a leak in cast-iron guttering

Lengths of old cast-iron guttering are often joined together with bolts.