10% off everything exclusively for B&Q Club members now on, just enter your card number for discount | Not a member? Join now to receive your discount 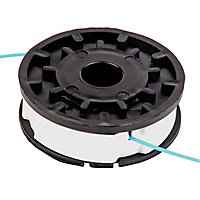 This was the only replacement spool for the strimmer I bought from B&Q available. Despit all reviews saying avoid I bought as had no choice. Broke within 30 secs. Staff at B&Q Cumbernauld branch refused to give me refund as told me I never tightened it enough!!! Amazing as dont recall them being there at my house when I used it!! Not the first time B&Q products have fell apart. Will stick to online shopping in future.

Brand new spoil gone in 30 seconds. Poor design buy a different make. Took my year old one down the tip and bought a Bosch one. No issues at all

Bought 2 of these and were delivered quickly, which is great because I'm shielding. Put first one in and it was gone in less than 30 seconds! Thought I had done something wrong so looked at manual and I hadn't - I even followed the exact process for starting and re-starting. So put the second one in and same result, gone in less than 30 seconds! It just doesn't stop feeding. The strimmer has hardly been used since I bought it last summer, and I stopped using it because something similar happened then, even as a brand new machine. Looks like the blue button stays in so it just releases all of the line which gets cut by the blade and ends up in pieces all over the garden.

I bought it a few weeks ago. Good quality easy to use i recomend it

Mr GWJC from Derby - 5 years ago

I bought this item about 4 weeks ago to replace in my Mcalister mgt430, I have used it successfully twice since then however the spool is now letting all the cord out due to being made from very cheap materials, even after refitting the cord back into the spool several times as soon as you use it the cord comes out of its location and gets wrapped around the motor, this is the second time in as many months I have replaced this for the same reason. I will most likely throw the strimmer away as I can not afford to keep replacing the spool at £7 a pop, needless to say this will be the last time I purchase any item that is Mcalister. Very disappointed!!