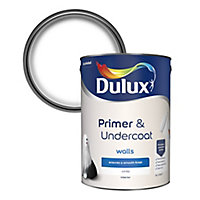 This Dulux white primer & undercoat is perfect for preparing a consistent surface on your interior walls before you begin decorating. Ensures a smooth finish.

Please note that this item has additional safety or regulatory datasheets available. The product may have possible health and safety hazards covered in these documents. Refer to the container for full information and always follow the instructions.

Had completely uneven walls with paint chips everywhere. After sanding, I just applied this base coat and the finish is excellent. You cannot tell what the wall was like as it is now totally smooth.

I use it after removed the wallpaper last month. It did well and worth for money. Will have it next time.

Not sure how to describe this paint in one line

I bought the 5L can to prime and undercoat by bedroom walls after much sanding and cleaning. I found the paint to be very gloopy, thick and sticky, so was difficult to consistently apply using a roller. I found it better to load small amounts on the roller and do smaller areas at a time, otherwise the previous paint layer would bubble up, and when dry show rough patches. Once dried though, the paint seems to fluff up, and give a good smooth surface that is easy to sand and paint. For me the issue with the paint was that as an undercoat, there wasn’t enough pigment in it to cover up the previous light blue and magnolia, but as a primer, it did a good job. I think in hind sight I should have used a trade equivalent, which might cost more, but probably would have more pigment in it and less thickeners, that way it might have been a quicker job with less coats required. I would use this paint again, but only as a primer.

After stripping the wallpaper from my bedroom I painted it previously and as it dried over the year I had nothing but cracks forming everywhere. I decided this time the time spent decorating my room will no be in vain so i searched for some good primer paint. When i first used this paint i was expecting to get the same cracking effect but amazingly every wall dried beautifully and it was such a bright white it was better than any other white paint i purchased. I only needed one coat. I then painted over it with glittery lilac and my room looks pretty finally. I also had to scrape off the ceiling as it was falling off in places. This worked perfectly on the ceiling and i only needed 1 coat for the ceiling. My whole room looks like a professional has painted it so i would reccomend this for anyone with the same problems!