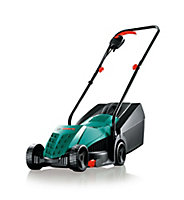 This Bosch Rotak 320ER Lawnmower is ideal for cutting grass and keeping your lawn neat and tidy (suitable for gardens up to 150 m²).

I bought this lawn mower last month and i am really happy with it. I am always happy with all the products i buy from B Q they are so nice and perlite and they have good customer service.

This product will the last I buy online via a recommendation. Really flimsy low quality grass box and on off switch. Adjusting height is a pain too. Cancelled my Which? Subscription after buying this!

I recently purchased this to replace my old petrol mower, I've never had a corded lawnmower before but wanted something lighter than my previous model. I didn't expect this to be as powerful as my last one but many of the reviews I read stated that the 320ER was great for smaller/medium sized gardens and managed to cut longer grass with ease - which is why I bought it.

The 230ER turned a usually quick and straightforward bit of garden maintenance into an absolute mission! My garden is about 8m x 5m and it usually takes about 15 minutes to mow with the bag only needing to be emptied once during, twice when the grass is long. I used it for the first time yesterday, it had a been a couple of weeks since it was last mowed but it was by no means long. I kid you not when I say I must have emptied the lawnmower bag 20 times!!! The collection bag is small on this model and when it becomes full the blades get jammed with grass cuttings. I ended up using an extension cable, not because the cord isn’t long enough but because I got bored of repeatedly going into the house to unplug the lawnmower so I could safely remove the blockage. The constant stopping to empty the bag and unblock the blades resulted in it taking over an hour to cut the grass!!

The 230ER has done a good job but its honestly not worth the effort required. I will be returning.

Just coming up to 2 years old and the blade is coming loose. Cannot loosen or tighten it so off to the tip with it.

Needed a light-weight mower as lawn has a steep slope and this is perfect for me. Feels a little flimsy during assembly during which I felt I could have maybe bought a lesser known brand for less money but it does the job I wanted it to do so I’m happy with my purchase.