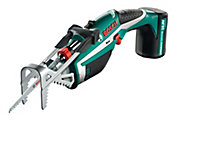 Its Swiss precision blade helps users to easily cut branches up to 80mm with the push of a trigger. The cordless design ensures 30 to 190 cuts per battery charge. The detachable “A-Grip” holds unsupported branches while ensuring hassle-free pruning

Please note that this item has additional safety or regulatory datasheets available. The product may have possible health and safety hazards covered in these documents. Refer to the container for full information and always follow the instructions.

It's hard for me to give much of a review on this because it broke after I'd cut about ten branches. The trigger switch is also a speed controller, the further you squeeze it the faster the blade cuts. After a couple of minutes the motor dropped to about half the speed it started cutting at. The battery was fully charged, the motor was not overloaded, it just wouldn't run at full speed even after another full charge and a cooling down period.

It's going back tomorrow for a refund.

I love this saw! Used on numerous occasions to prune three trees in my garden. Works a treat and very good for sawing branches into smaller pieces for waste management. 5 star + product.

Easy to operate and comfortable to use. Have only used twice and it performed well. Made the jobs a lot easier. I would recommend.

I bought this saw about a month or so ago and it is a very good product for the money, l have used it alot since my purchase and l am very very pleased with it. l would highly recommend it to family and friends who may be looking to purchase a saw at a very good price.