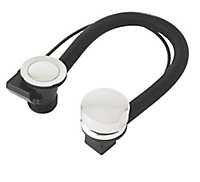 This chrome effect bath overflow and waste from B&Q is Designed for baths.

Time to choose another sort

Installed this to replace an existing pop-up. In itself, that was an easy task. It's a straight forward job to fit - good seal between the bath and the waste. And that's all that can be said as a positive.
A year on - it does not seal particularly well when closed - and does not pop up when opened. The kids sit on it to keep the water in - and the adults use two hands to pull it out when they are finished.
All of this despite several attempts at adjusting the depth screw.

Didn't hold the water in.

Cheap and had to get our plumber to replace it after 1 day.